skip to main | skip to sidebar

I need to say, right off, that Special Topics in Calamity Physics by Marisha Pessl is a literature-lover's book.

The first thing I noticed was that Pessl titled each chapter with a work of literature, and that each chapter has subtle references/resemblances to that work. She is a young (twenty-something when she wrote this) writer who, evidently, likes to show off her literary knowledge. This may put off many from reading this book, and I can't really recommend it to anyone who might shrink from this sort of thing. But to those of us who thrill to seeing so many literary references (often a bit too much - I think Pessl is showing off much of the time), this book is one to put on the list.

A short synopsis of the book: Blue Van Meer is a 16-year-old who arrives in a small North Carolina town and attends an exclusive prep school. She has spent her childhood traveling the country with her father (a charming college professor), going from school to school. Most of the book follows her through her senior year at St. Gallways and her unusual acceptance into an exclusive group who call themselves the Bluebloods. The story follows Blue's relationships with the Bluebloods and with Hannah Schneider, the film teacher (film teacher??) who is the leader and nexus of the group. The story takes a really odd turn when Blue finds Hannah dead - strung up in a tree with electrical extension cord. (This is not a spoiler, as it is mentioned in the introduction of the book.)

Let me just say that the rest of the book winds dizzyingly into a mystery that is never really "solved" or explained. The final chapter of the book is titled "Final Exam" and literally asks more questions than it answers. I warn you that this can be a frustrating book for anyone who likes their novels to have some finality. All I can say is that I loved this book.

And be sure to check out the extremely clever little website set up for this book.
Posted by Ms. Mona at 9:35 PM 1 comment: 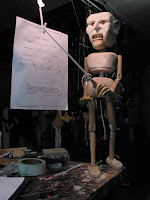 I know I've been away a long time. Apologies. Time to make this blog a habit again.

I have been involved in stage managing yet another production at Brüka Theatre. It's been a lot of work and very time-consuming, but a lot of fun.

The show is titled "Beckett Undressed" and it is a compilation of three of Samuel Beckett's shorter works including Imagination Dead Imagine, Krapp's Last Tape, and Come and Go. There is also an original piece by our director, Stacey Spain, called No News, that she created specifically for this production at Brüka, and is heavily influenced by Beckett's work.

Stay tuned to this space for lots of commentary on the books I've been reading and perhaps a story or two about theatrical goings-on.
Posted by Ms. Mona at 3:36 PM 1 comment:

Ms. Mona
A mere accountant with a love of books and poetry and Shakespeare.